Successful Mobile Deployments, Without the Disruption

When a dog breaks their leg, they tuck it under their body, avoid putting weight on it and keep walking with their other three legs. This might minimize the pain for the time being, but it doesn’t help the leg to actually heal. This is the same thing we see many field service organizations do with broken training processes, particularly after a new mobile app or device deployment to the field. Instead of making an effort to fix the issue, they just use workarounds to make sure it doesn’t hurt that bad. Instead of being stuck in an endless cycle of doing the same thing over and over again, let’s explore what’s not working and how to fix it.

Training is always an afterthought

Rolling out a new application or device is exciting. So exciting that we often forget about the training portion of the rollout. Companies are often so wrapped up in creating and deploying the actual technology, that training gets dumped in the project manager or team leader’s lap at the end. It’s important to remember that deploying to the field is far different (and requires a different kind of training) than deploying to office-based workers who spend their day sitting in front of a desk. Notably, it’s hard for workers to carve out even a few hours for training since they have routes to deliver or service calls to make.

“It’s clear to me that the executives didn’t consider what would happen after they built the new app; they were just worried about creating it. Now, I have to figure out how to train my team on an application that they’re expected to already be using.” - A resentful team leader

Field workers do a workaround and have to live with it

When field workers don’t know how they should be using an application or device, they’ll often find workarounds. This isn’t as a result of field workers being lazy; it’s the opposite. They need to get their jobs done, so when technology gets in the way, they figure out how to work around it. This drives inefficiencies, an opportunity for errors, and wasted resources from the new technology rollout since workers aren’t using it as intended. Effective training ensures that technology doesn’t get in the way of field workers doing their jobs; mobile apps are a tool that they need to know how to use successfully when they’re in the field.

“My workers got in the field and forgot all of their training. Instead of asking for help, they found alternative ways to use the app or don’t use it at all. This sort-of worked for a while, but now it’s causing major problems across the board.” - A thwarted supervisor

It’s a burden on supervisors and tech support

Whenever a worker has a problem with their application or device, the first thing they do is either call their supervisor or the help desk. At the same time, supervisors are getting pressure from above. Troubleshooting on tech issues isn’t their job, while the help desk may be overwhelmed with requests from workers who don’t know how to use their technology. By utilizing on-device training, users are largely able to train themselves. From there, tech support and supervisors are only engaged for extra help when needed, instead of getting inundated by calls to learn an entire tool or anytime there’s an issue.

“I don’t have the time or resources to handle tech issues, but my workers come to me when they can’t get an answer from tech support. Dealing with these problems is keeping me from other important things I need to do for my team.” - A frustrated supervisor

Project and program managers have to travel to train users, often at multiple sites across the country, or even internationally. As a result, these managers tend to be on the road for weeks at a time. With digital, on-device training, one-on-one training becomes unnecessary and helps you to stay off the road and ensure programs are successful, while still allowing you to see your family.

“I’m inclined to purchase a digital adoption platform myself because I worry if not, my husband won’t be home for Christmas.” - An exasperated wife

After immense time and money have been invested, users still don’t know how to correctly use their applications and devices.

After investing in this new technology to make a difference, users forget nearly everything they had learned in training. By using a digital adoption platform and implementing ongoing training, users have access to the training they need, when they need it. Even more importantly, by using mobile application simulations to train on mobile, field workers have the ability to do it on-device, on-demand. This ensures if they forget how to do something, they’ll always have resources at their fingertips to guide them back on track.

“We’ve spent an insurmountable number of labor hours and far too much money on a new application. Now, months later, my workers still aren’t using the application effectively and we haven’t seen any of the business results we’d anticipated when we built the app.” - A frustrated VP of Operations

Skyllful can solve these problems and help your organization avoid additional headaches associated with new applications and device deployments. With Skyllful, field workers have access to the lessons they need, on-demand, right on the device they’re already using in the field. Interested in learning more about how Skyllful can help you minimize stress and maximize the value of your applications? Schedule a consultation for expert advice from our digital strategists.

Want a PDF version of this page?

Download the guide to have a headache-free mobile deployment! 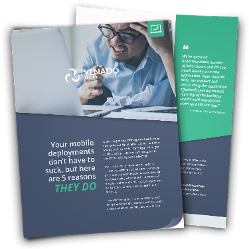